JD. Very cool start at 44 F but able to walk to Logroño for breakfast

Ended up doing 24.6 km 15.3 miles. Left knee reasonable right knee so so. If it does not get any worse than that pain level we are good to go. Did find out if I slow my pace down but lengthen my stride there is almost no pain. Hmmm!

The church in Naverrette – Assumption of Mary was started in 1533 and finished in 1645. Amazing interior and when the lights came on because of a 1 euro donation the view was extraordinary. 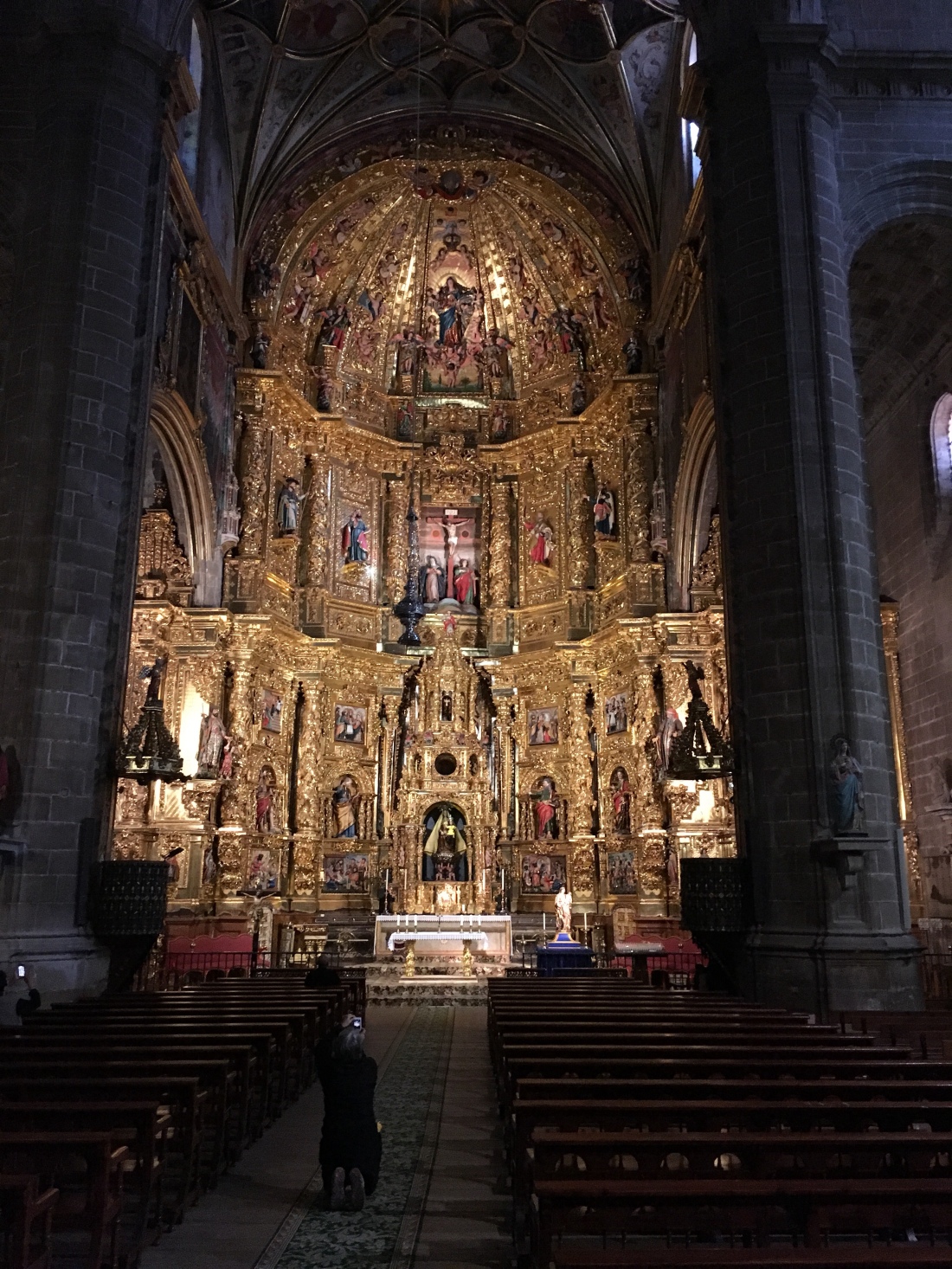 Ate a pilgrims meal at a bar next to the church where many other peregrinos were eating and drinking. Even had an invitation to drive to Madison, WI to play in their orchestra.

And at the albergue we were staying was a picture of a past peregrino.

B: After freezing yesterday morning, this morning out came the gloves, ear band, buff, and tights. They were a welcome addition until around 10 am when it warmed up nicely.

Today we were honored by a walk with Alex, a native of Navarette. He happened upon us on the Camino and asked to walk with us to the next town of Vendosa. Along the way he answered our questions and provided us with the history of the Camino and the region. The Muslims had a strong influence in the area until the Christians took back the land previously occupied. Alex told us he walks with pilgrims daily. Our walk with him was about 5 km (3 miles) then he turned around and headed back.

We walked by miles and miles of square miles of vineyards. The vines were heavy with grapes and supplied us with snacks along the way. They were good if seedy. In some areas there were many bunches of grapes just lying on the ground between the vines. Huge bunches. 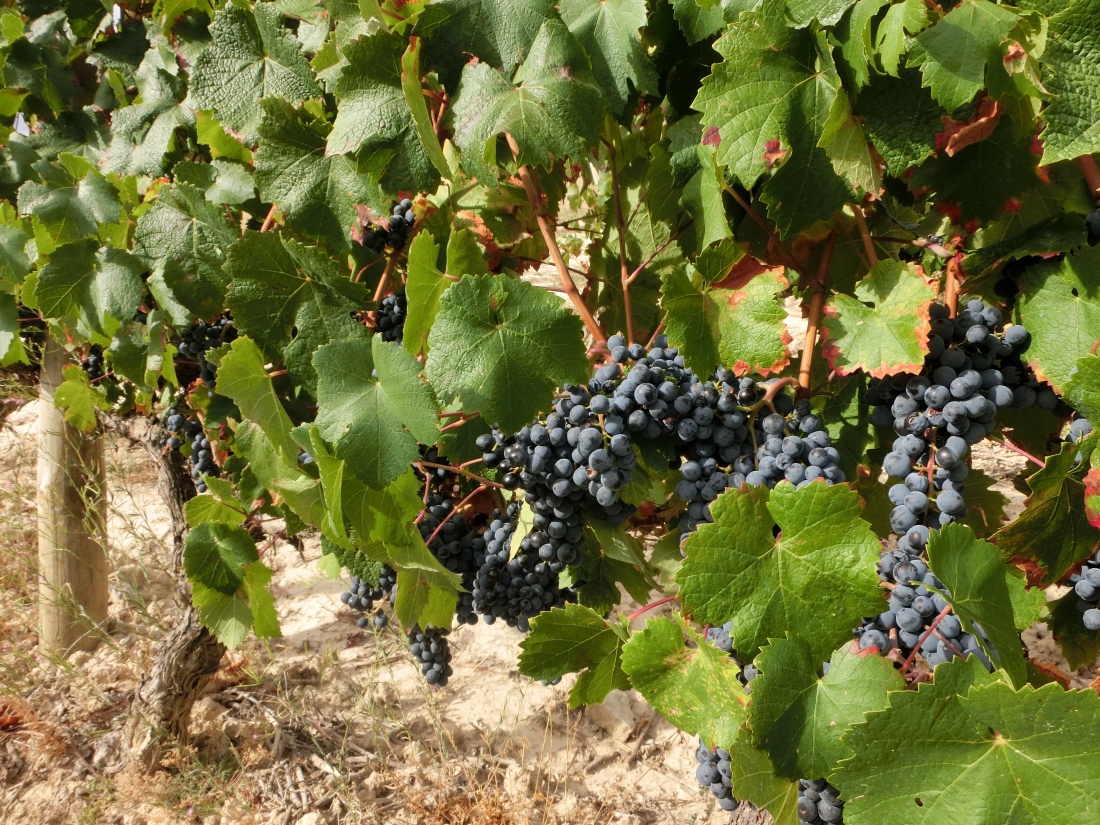 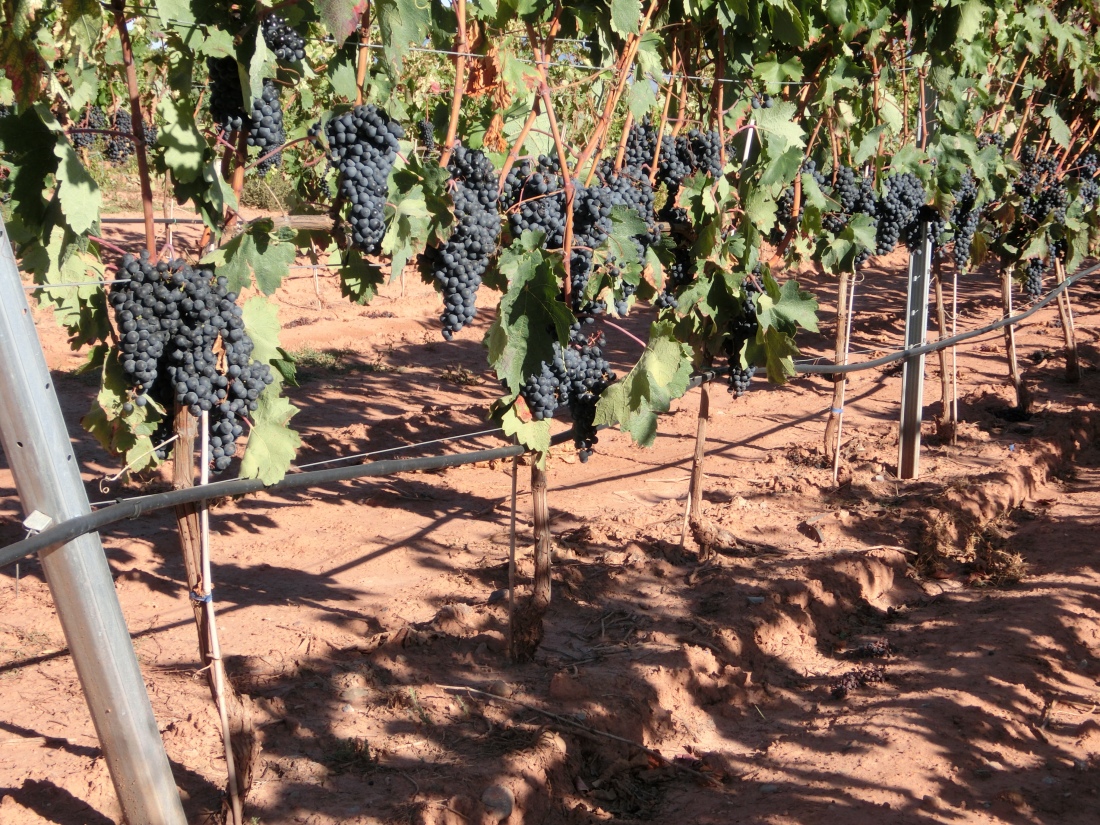 Need to find out how the grape harvesting machine works

Interspersed with the vineyards were olive groves. This is an OLD olive tree. Were have seen none older.

Our albergue tonight was the Municipal run by the city of Azofra. What nice lodging! Instead of a large room with rows of bunks, we had a small room for two with a window/balcony. Nice and quiet and we were able to wake up and pack with the lights on and not having to be as quiet. Clean, neat, with a large kitchen and dining room. Outside was a small fountain especially constructed for soaking of tired feet.

It was cold again this morning but not as brisk. Gloves were again appreciated.

The terrain was totally different with no vineyards and lots of harvested fields. At one point we stepped off the Camino to allow a shepherd, his dog and about 300 sheep to pass by. That took at least 10 minutes. Several of the sheep were lame to one degree or another and we felt badly for them. Oddly enough, we do not know from whence they came nor knew where they were headed as we did not see any pastures along the way. 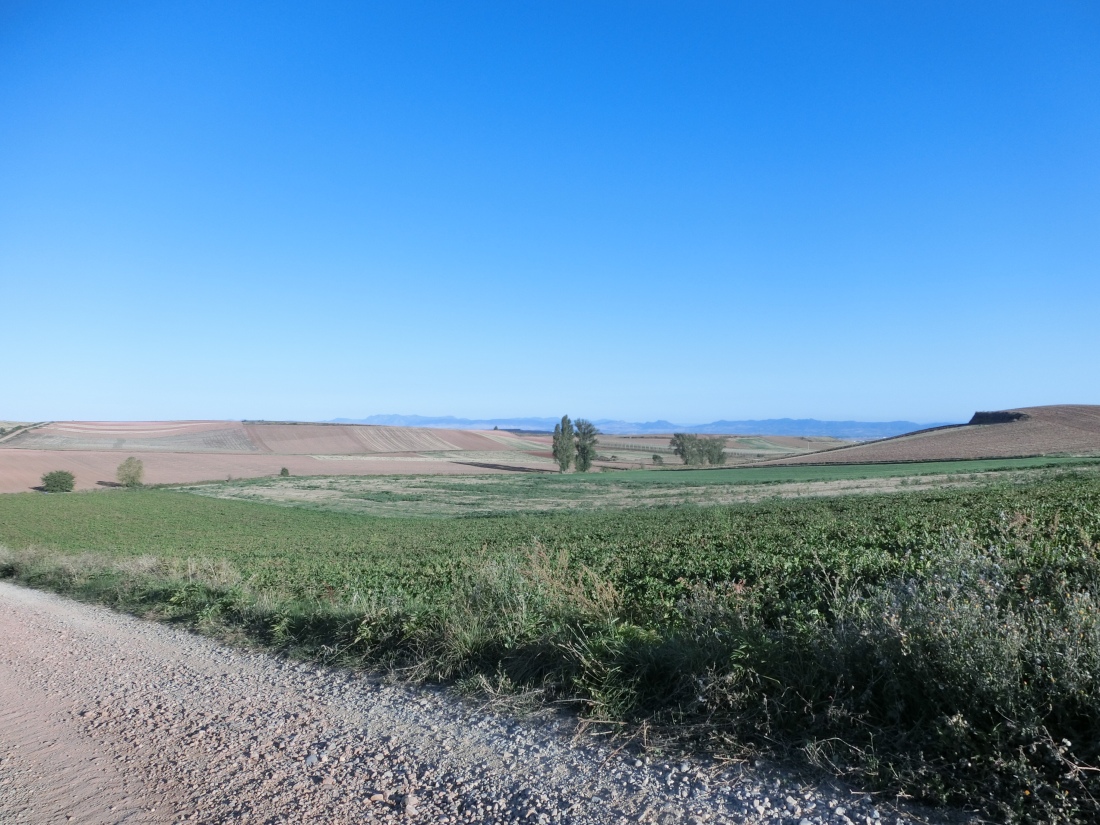 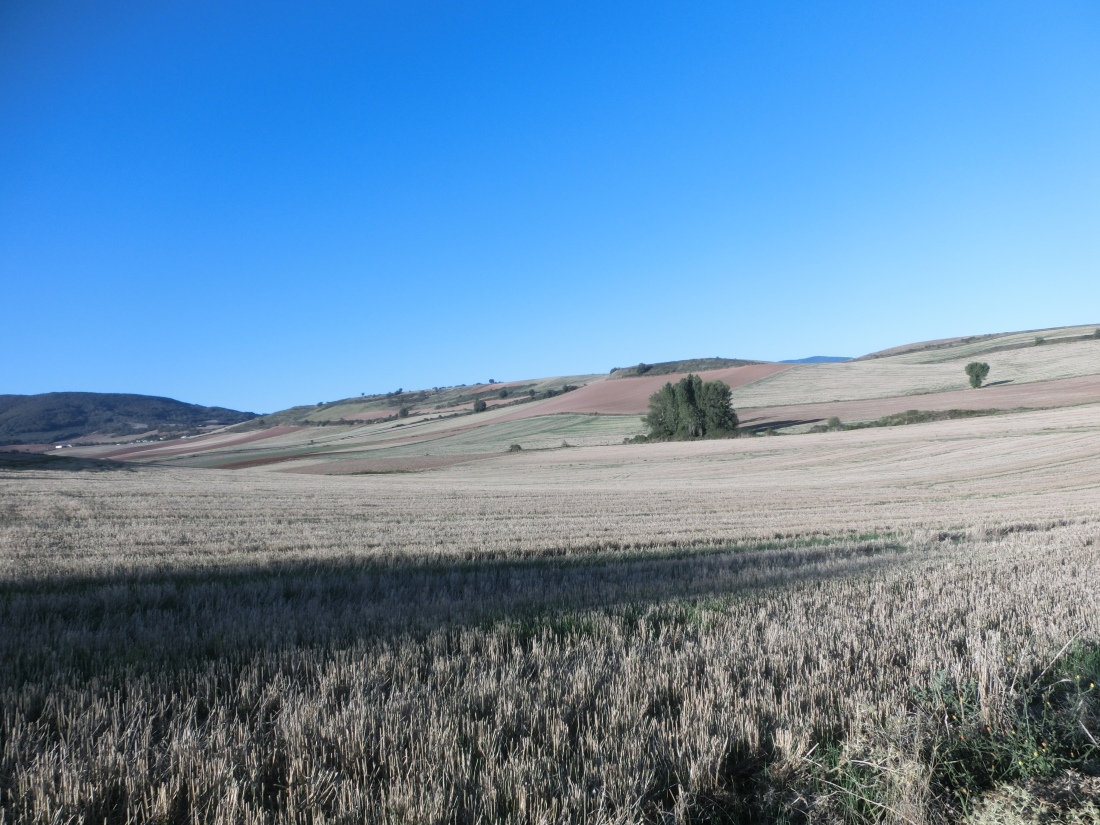 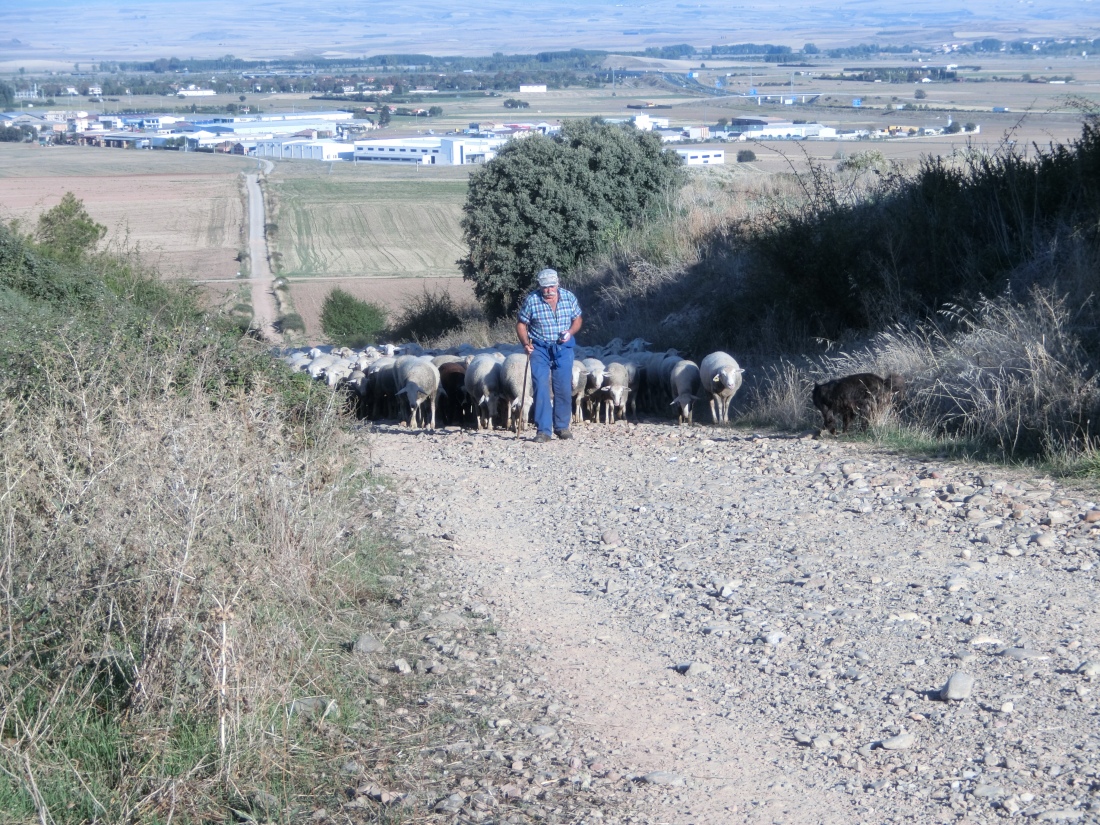 We did have an encounter with a rude Spaniard today. He had set up a small fruit stand “donotivo” or donation. I dug in my coin pouch and came up with a .50 coin and Jim took a small glass of watermelon. I was digging again in my pouch and put some coins in the box and was looking for more coins as I took a nectarine. He went bonkers telling me the coins were not enough and he would not serve me. Going on, he said the fruit cost him more than 1 euro and God would know the type of person I was. It was quite a scene. Yikes. Others today stated they felt he was very rude as well.

Can you say Patatas? 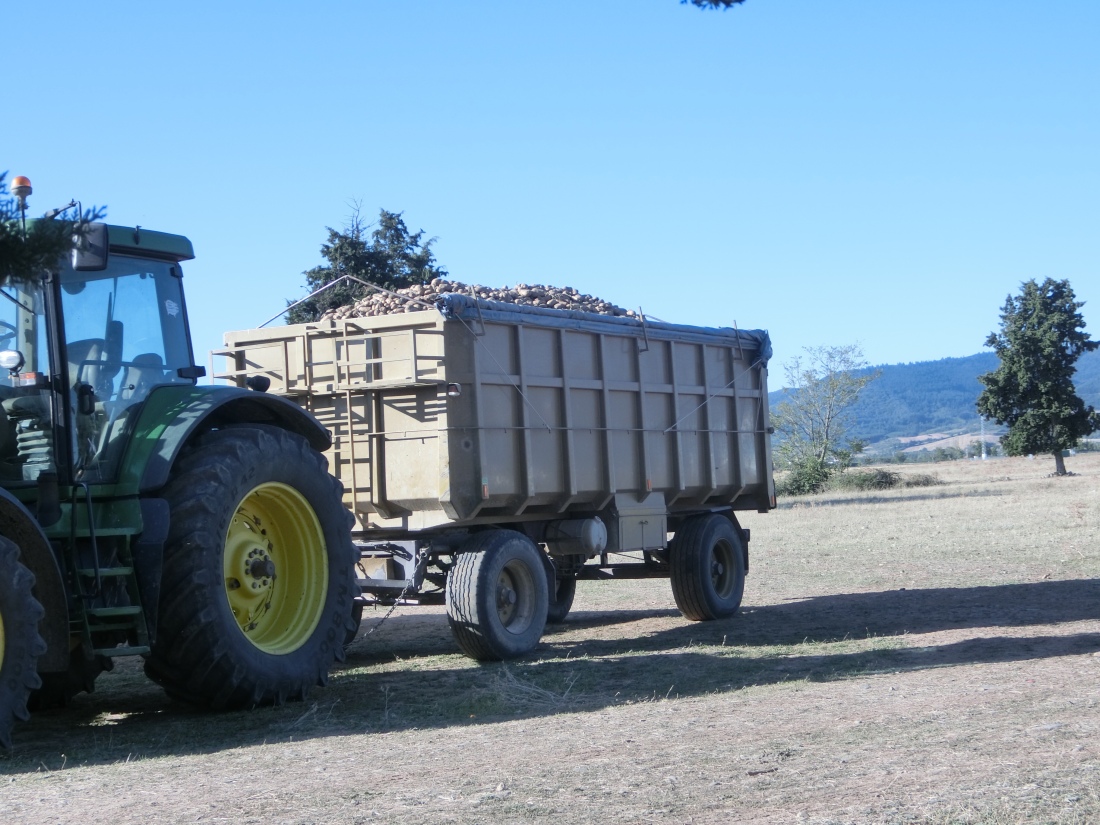 Lots and lots of potatoes being processed as we walked into town. All sizes. I have never associated Spain with potatoes.

Good solid lunch at a bar in Nájera which also helped my knees immensely. Continuing to ship my pack ahead which does limit our options on mileage! Tomorrow will be a test.

In Santo Domingo de la Calzada we find a nice bakery where we say goodbye to our Irish friend Lawrence who is pushing forward to meet his son and sister. This town is worth revisiting.

We also run across an albergue serving pilgrims since 1106. No typo! 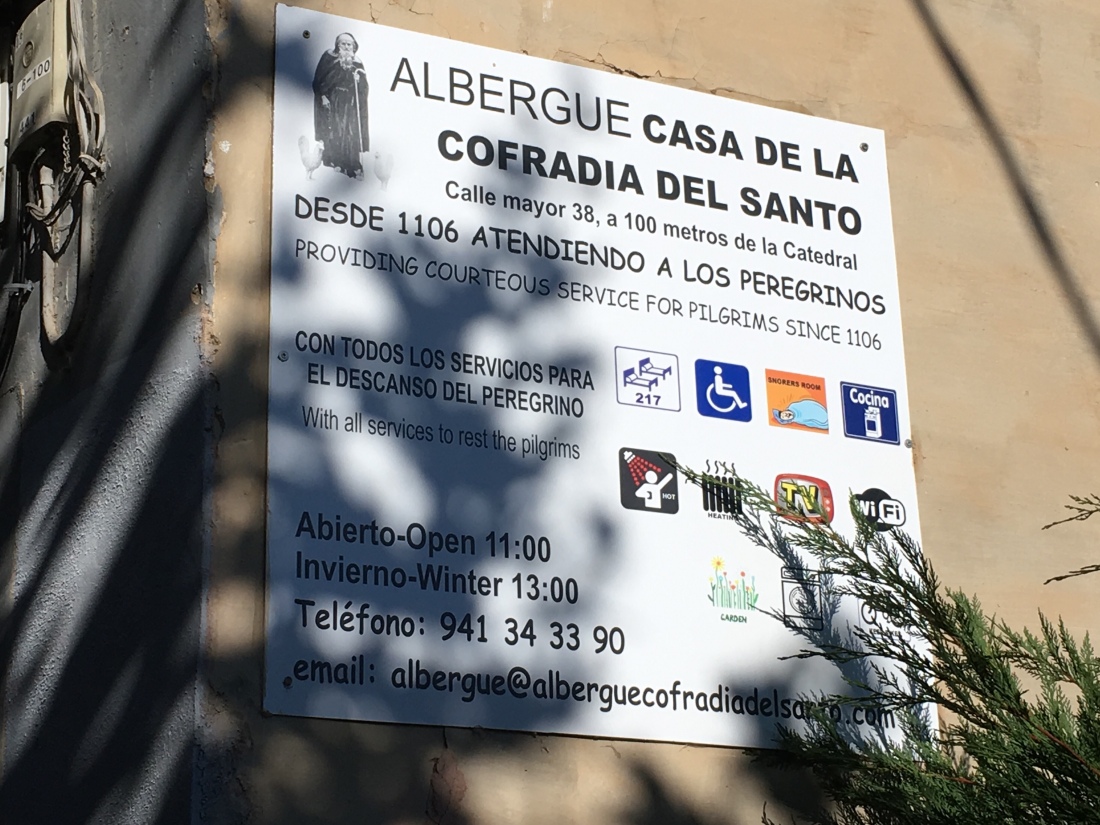 The city has most of their landmarks listed with plaques of it’s history.

And also outside of town is what I would describe as an ancient alien landing site.

Get to our donativo albergue the San Jaun Bautista church which has been serving peregrinos via donations for 28 years. Very nice dinner communal style, sleep on the floor on 2” thick mats and a nice breakfast of more than just toast and jam.

View all posts by bjtrips

Prepping for the Continental Divide Trail